Dealing with depression, by Natalie Oates 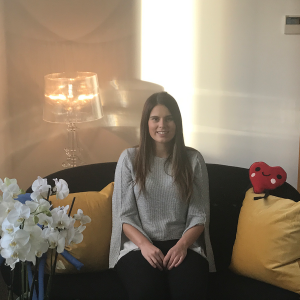 My depressive episodes first begin whilst I was at University. Despite having the best time going out and meeting new people, one day my mind just totally altered and I began feeling very negative and emotional.

When I wasn’t out socialising, I had no real structure to my life, and during quiet periods my brain would go into overdrive, thinking and worrying about all sorts of random things. I felt heavy, like I had no energy to see people or do simple tasks. I cried for hours but I couldn’t put my finger on why I was so emotional. The simplest decisions, such as what to have for dinner, felt like the most stressful tasks. I had no attention span and felt like I could sleep for days.

I didn’t feel able to leave my dorm room so I became almost dependent on my boyfriend at the time. It took all my strength to drag myself to lectures and I ended up failing my first year as I just wasn’t engaged at all. My personal experience of depression was like someone was sitting on top of me, and I couldn’t shift them.

I would stay in my room feeling sorry for myself with no real understanding of why I was feeling so terrible. On the outside nothing was wrong. I was in my fresher’s year at uni with no responsibilities. I had a loving family and a boyfriend but for some reason there was this big dark cloud over me that I didn’t have the energy to shift.

Depression and anxiety do not discriminate

When you are dealing with depression, you can often feel embarrassed or ashamed. Some people think those who suffer from mental health issues should just ‘pull themselves together’. But depression and anxiety do not discriminate – it can happen to anyone, in any circumstance, and can have serious implications if not treated and taken seriously.

I have been extremely lucky to have people close to me who take my illness seriously, but sadly there are so many people out there who go through this alone. I can’t even contemplate how hard this must be for them as I know first hand what it’s like to feel totally hopeless, and how difficult it is to gather the strength to battle with your own mind.

When I finally went to see a doctor I was like an empty shell. Nothing in the world would cheer me up. But it wasn’t a case of just cheering up, I needed help to get out of the negative headspace I was in. I remember my mum saying that I had lost the sparkle in my eyes, which hit me hard, and made me realise that it was up to me, not my doctor, to fight the depression. Your doctor can prescribe you antidepressants, which can really help, but it’s also important to practice self-awareness and get the bottom of why this illness has attached itself to you.

These days I can’t tell you that the depression has fully left me, but I have learned to control it over the years. It comes in waves and although it seems to appear out of the blue, I’ve realised that there will always be a trigger. In order to banish the negative thoughts and feelings of lethargy, I force myself to go out and do things. I also try to pinpoint why the depression is paying me a visit again.

I have different techniques that I learned through various types of counselling, such as CBT. For example, I now try and write down what’s bothering me, and then think ‘what is the worst that could happen?’ and ‘can I change it?’. If the answer to the second question is no then I tell myself to forget about it. It’s easy to spend too much time worrying about the future, regretting the past and not focusing on being present.

An example of this would be that I recently smashed my phone (again – must get insurance!!). My natural reaction would be to get really angry and fed up, but on this occasion, I just thought to myself ‘will being angry make my phone miraculously fix itself?’, of course not! All it would do is make me feel 10 times worse, and I would still have a smashed phone. So instead I just accepted it, decided on a solution, and moved on. This approach can be used for all sorts of situations in life and is how I try to manage my spells of depression and low mood these days.

When dealing with depression, you don’t have to fake a smile

My final note would be to encourage people who are dealing with depression to speak up. As awkward as you may feel, there is ALWAYS someone out there feeling the same way as you. Bottling things up only hurts you, and others, as you will eventually explode. So rather than letting things escalate to that stage, PLEASE speak to someone – your doctor, a friend, a family member, even use a 24/7 crisis helpline. You could also try self help options, such as the My Possible Self app.

Be mindful that you really don’t know what another person is going through. People are good at acting like everything is ok, but you needn’t fake a smile. Mental health is still seen as a taboo subject that people find awkward to discuss, but the more people who speak up, the more can be done to prevent it for others.